Best Age Appropriate Games for a

New Year's Eve has traditionally been a family game night–a time for snacks and board games in our home.  It is a time away from the tech world that seems to take so much our time now.  When the children were young, the games were often noisy and the children rambunctious. 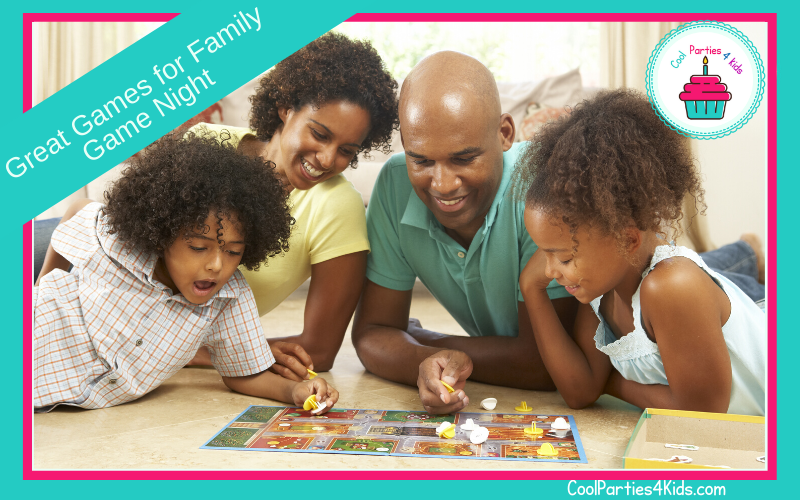 That did not change as they grew older.  Depending on the game, alliances could be created, strategies shared or not, and the stakes were high.  After all, one needs to be at their best when playing games to dominate the world.  (We have taken a break from Risk…)

Board games continue to play a part in the lives of our children.  Family game night evolved into work friends game might for one of my sons. He invites co-workers and nearby family over for a weekly game night.  Their games are very complicated, and though I do not play with them, I still hear a lot of laughter. That never gets old! I have listed some of the best (my opinion) games for families to play.  Many are classics, and that is simply because they are so great!

Playing board games and games in general with your children has many benefits. 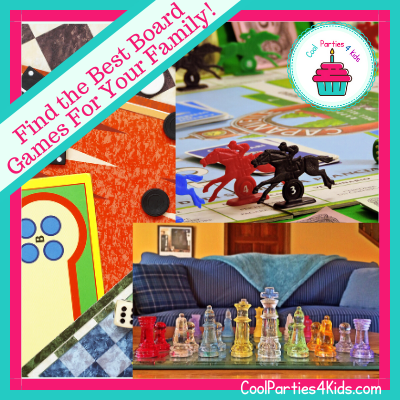 While playing games, children develop skills that include physical, social, academic, and other mental developmental skills.

But most importantly, it is about taking the time to play together with your children.  This helps form an essential bond that brings people together for years and years, through good times and not so good. Occasionally, I see my grown kids playing with their children or nieces and nephews, and it sparks my memories of their childhoods and I smile. These are the things that help bring meaning to life.

When I asked my kids about some of the games on this list, they remembered playing many of them and some of the drama involved. One of my memories: playing Connect 4 was often meant to be a quick game when the time was tight but would it often turn into a much longer game-play time, and one of us would say, Just one more.”  No one wanted to lose.

So take some time and explore what games are best for your family. For young ones, I have listed age-appropriate games, but please be aware of choking hazards and keep your young ones safe. Make the best decisions for your family.

While playing games, children develop skills that include physical, social, academic, and other mental developmental skills. But most importantly, it is about taking the time to play together with your children. Click To Tweet 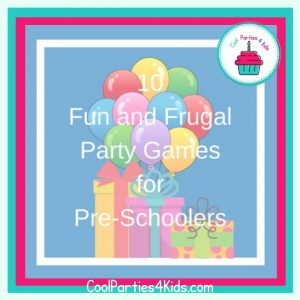 Board games for this age group include:

(ages 5 and up) and still a favorite of mine.  Battleship is the classic naval combat game.  It uses competition and strategy. In a one-on-one battle, you search for the enemy’s fleet of ships and your goal is to destroy them one by one. You try to protect your own fleet using your strategy while you attempt to destroy your opponent’s fleet.

(6 years old and up) This is a classic where you take turns positioning your red or yellow discs in an attempt to get 4 in a row while blocking your opponent from getting 4 in a row.  This can be lightning-fast and methodical or slow and methodical. This is a family favorite and one I will definitely play with my grandchildren.

(6 and up) Another classic game.  fast-dealing property trading game where players buy, sell, dream and scheme their way to riches. Part of the initial fun is choosing your token. So, choose your token, place it on GO! and roll the dice.  There can be only one winner in the Monopoly game. Will it be you?

A game of mathematical possibilities.  For a fascinating history and how to play information please “check” out: Learn to Play Checkers-There's More to Checkers Than Meets the Eye.

(depends on the child-play when they can understand the various pieces and the moves they can make.)   Two players. Each player begins with 16 pieces: one king, one queen, two rooks, two knights, two bishops, and eight pawns. Each type of piece moves differently.  The most powerful are the King and Queen. The objective is to checkmate which is putting the king into an inescapable position.  There are other ways to have the game come to a conclusion, including coming to a draw. Great for math and strategy skills.

This similar to checkers but the game board is a star.  Pieces are often marbles or other smaller spheres. Fun!

(8 and up) One murder…6 suspects. In Clue, players have to find out who's responsible for murdering Mr. Boddy of Tudor Mansion in his own home. A fun game to determine who, with what and where the victim, Mr.  Boddy, was killed. Using elimination, players try to play the sleuth and solve the crime.  There is also the 1985 classic comic movie and the more recent 2014 version where the main characters are teenagers.  The game is so popular that many versions of it are available including Classic, Retro, Firefly, Star Wars, Harry Potter, Big Bang Theory, Legend of Zelda, The Office and many more.

Ticket to Ride is a cross-country train adventure where players collect cards of various types of train cars that enable them to claim railway routes connecting cities in various countries around the world. (ages 8 and up)   Other games to investigate include:

and so many more…

In Pandemic four diseases have broken out in the world Each disease is threatening to wipe out a region. In the game, there are 2 to 4 players each playing one of five possible specialists: dispatcher, medic, scientist, researcher, or operations expert. Unlike most board games this gameplay is cooperative, rather than competitive. Players combine efforts of all the players to discover all four cures before any of several game-losing conditions are reached. (Recommended for ages 13-15) and above.

The title is pronounced “Block us”. It is an abstract strategy game with transparent, Tetris-shaped, colored pieces. The only caveat to placing a piece is that it may not lie adjacent to your other pieces, but instead must be placed touching at least one corner of your pieces already on the board.

Players assume the roles of settlers. Each player attempts to build and develop their holdings while trading and acquiring resources. Players are awarded points as their settlements grow. The first player to reach a set number of points, typically 10, is the winner.  (I have played this and I enjoyed it very much!- easily multi-generational)

Cranium is a game that is supposed to be an “all-brain” game. It borrows elements from many popular games. It's a party game that borrows from a host of other popular party games of recent times. Cranium has elements similar to those of Pictionary, Charades, Trivial Pursuit, Celebrities, Huggermugger, Claymania, etc.

Players need to successfully complete activities in each of four sections to win:

Grown-up kids of any age 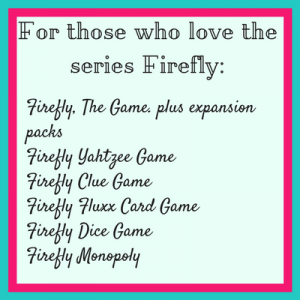 My Personal Choices-  As I have said before—All games with a “Firefly” Theme-the Greatest Space Western–ever!  It was the greatest mistake that the network canceled it!  A perfect weekend (for me) would be a Firefly/Serenity Marathon while playing the following games with added bits of Firefly Trivia.  And it is one my grown children would also enjoy because they also loved the series and film.

So when life seems like it is going to fast…

the children are growing too fast, or that you all need to take a deep breath and slow down, it may be the time to have a family game night, some snacks and reconnect with each other.  It will be worth it and your family will grow together now and for in the future.

So, with these suggestions to explore, find the games that are best for your family and plan your family game night.

A printable sign is available in the Resource Library, so go plan so fun! 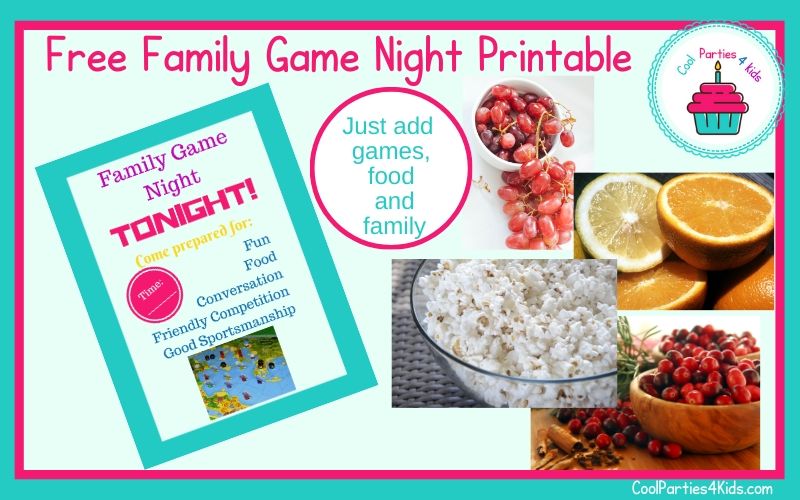 So, above all, feel comfortable starting a new tradition that will bring your family closer together and help create memories that make you all smile.

This site uses Akismet to reduce spam. Learn how your comment data is processed.